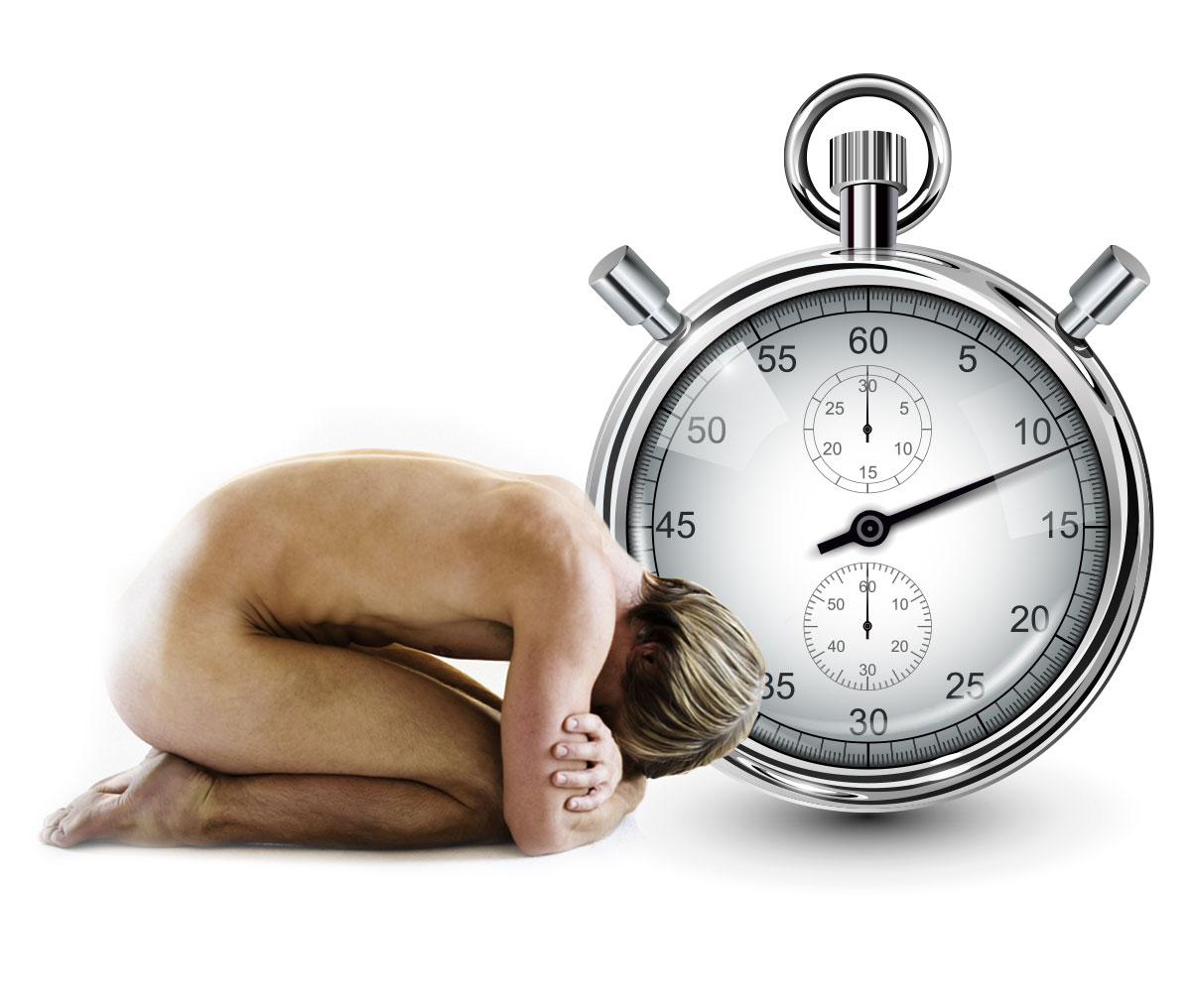 Melatonin, what it is 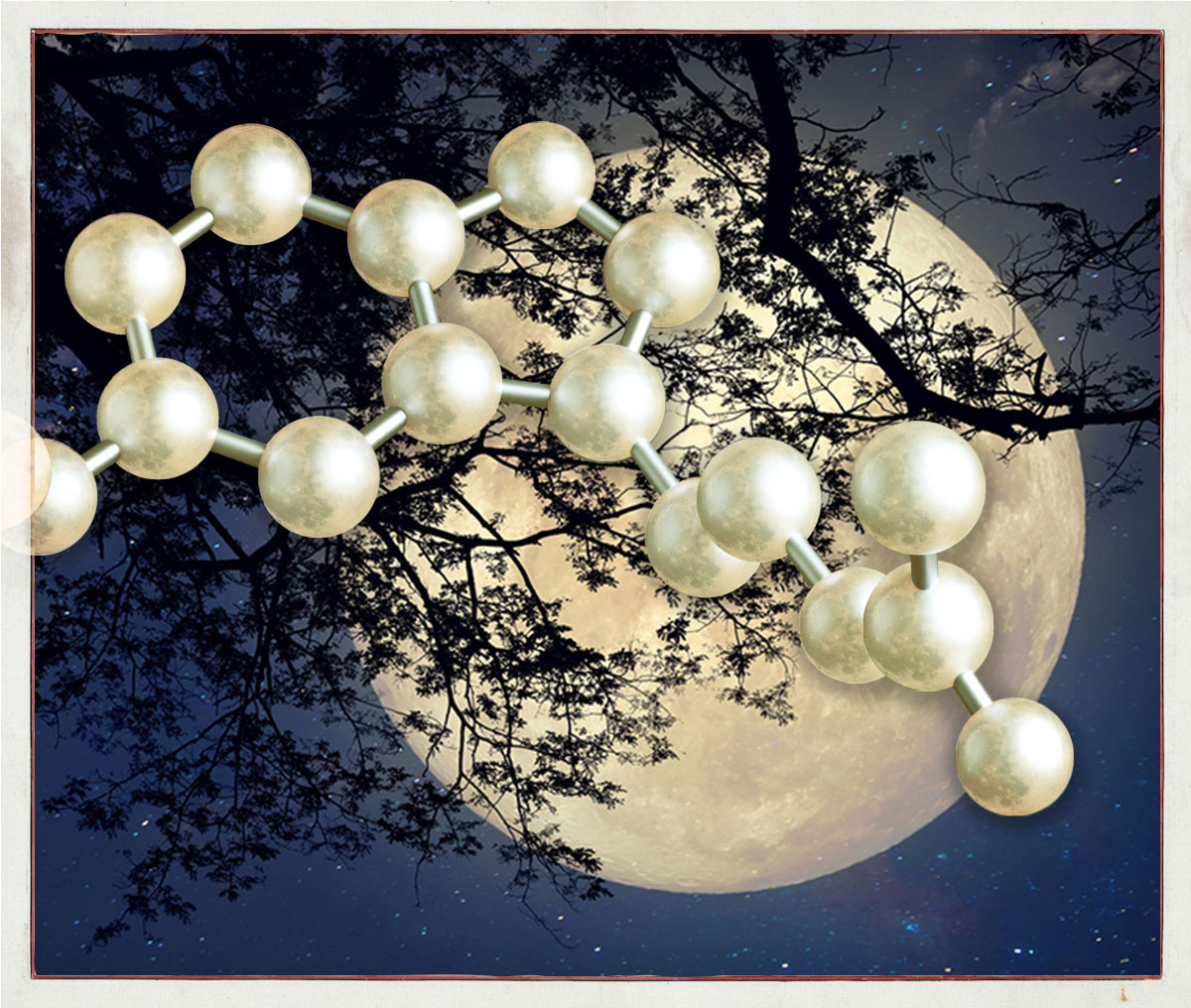 «Melatonin is a “lunatic” molecule.

Far from any romantic meaning, the moon has actual tangible influences on daily life.»

Melatonin is an ancient molecule that, together with others, has made the evolution of life on earth possible. More correctly, it is the evolution of a message that has been consolidated into a chemical expression. Having become the messenger of the night, melatonin is able to influence, cycles, at all levels, including hormonal and cell levels.

«We are cyclical at all levels, melatonin is an expression of this cyclic nature.»

It is present in many forms of animal and vegetable life, it has a cyclical structure composed of an acetyl group and a methyl group and has high bio-energetic potential, which still needs discovering in part.

Years of study on this precious molecule, have shown how its potential is far from limited to regulating sleep.

Melatonin what is not

Melatonin is not a hormone

(in the ordinary sense)

From the beginning, it has been undoubtedly a mistake to define Melatonin a «hormone», since this misleading definition generated a series of lies, designed to confuse the public about the real nature of our observation.
In fact the obvious reasons why melatonin cannot be defined as a «classic» hormone and all the less «dangerous» are:

1) Melatonin is synthesized not only in the Pineal Gland, but also in numerous other organs and tissues, such as for example the retina, the intestinal mucosa, in the megakaryocytes, the platelets and, in rodents, in the Harderian glands, all tissues that cannot be defined as typical «endocrine glands».

2) After the pinealectomy (surgical removal of the pineal gland) the circulating melatonin does not disappear likewise when the endocrine glands (pituitary, thyroid, adrenal, gonads) are removed.

3) There is no «releasing factor» for melatonin like those found and also used for all classic hormones.

4) Receptors with greater or lesser affinity for melatonin and «binding sites» have been shown and found in such a variety of cells (on membranes and in the cytoplasm) and body tissues that their nature as «specific hormone receptors» for melatonin on well defined target cells is impossible to demonstrate, given their ubiquitous spread.

5) Melatonin, even if administered in huge doses of grams per day orally (in an old experiment it had been administered in humans up to 6.6 grams per day for 35 days!), did not cause any immediate nor tardy damage or side effects. Any other true hormone, except for DEA (dehydroepiandrosterone, DHEA) would certainly have produced death or serious and irreparable damages, as it would be the case with cortisone and thyroxine. Therefore, contrarily to the «real» hormones, with melatonin no toxic side effects are observed at all. Moreover, 1500 women in Holland have been treated for years with daily doses of 300 mg without any damage!

6) The inhibition of endogenous melatonin synthesis after its oral administration, does not seem to depend, as is the case with classical hormones, on the inhibition of the synthesis of trophic factors (gonadotropins, thyrotropin, corticotropin etc.), but on a simple retroactive inhibition (feedback) produced by the same final product (melatonin itself) in a bio-synthetic sequence. This is why prolonged administration of melatonin cannot induce a «pineal atrophy»

7) Melatonin is everywhere in meat and vegetables, and dietary melatonin is rapidly absorbed from the gastro-intestinal tract. Recently conducted experiments with animals show that a diet rich in melatonin produces significantly higher blood levels of melatonin than those of animals with a low level of melatonin intake in their diet. Therefore certainly circulating melatonin levels can be changed (increased or decreased) by a kind of diet that contains high or low melatonin levels. Nothing similar can be obtained with any of the known «hormones»!

In conclusion, the definition of melatonin as a «hormone» is absolutely wrong and has no scientific basis. As a matter of fact the nature of melatonin mechanisms of action as «universal chemical mediator of the biological world» is still unknown, exactly like the penicillin mechanisms of action was unknown when it was discovered and used to save from deadly infections. And it wasn’t an endogenous substance!

It is produced
by the pineal gland 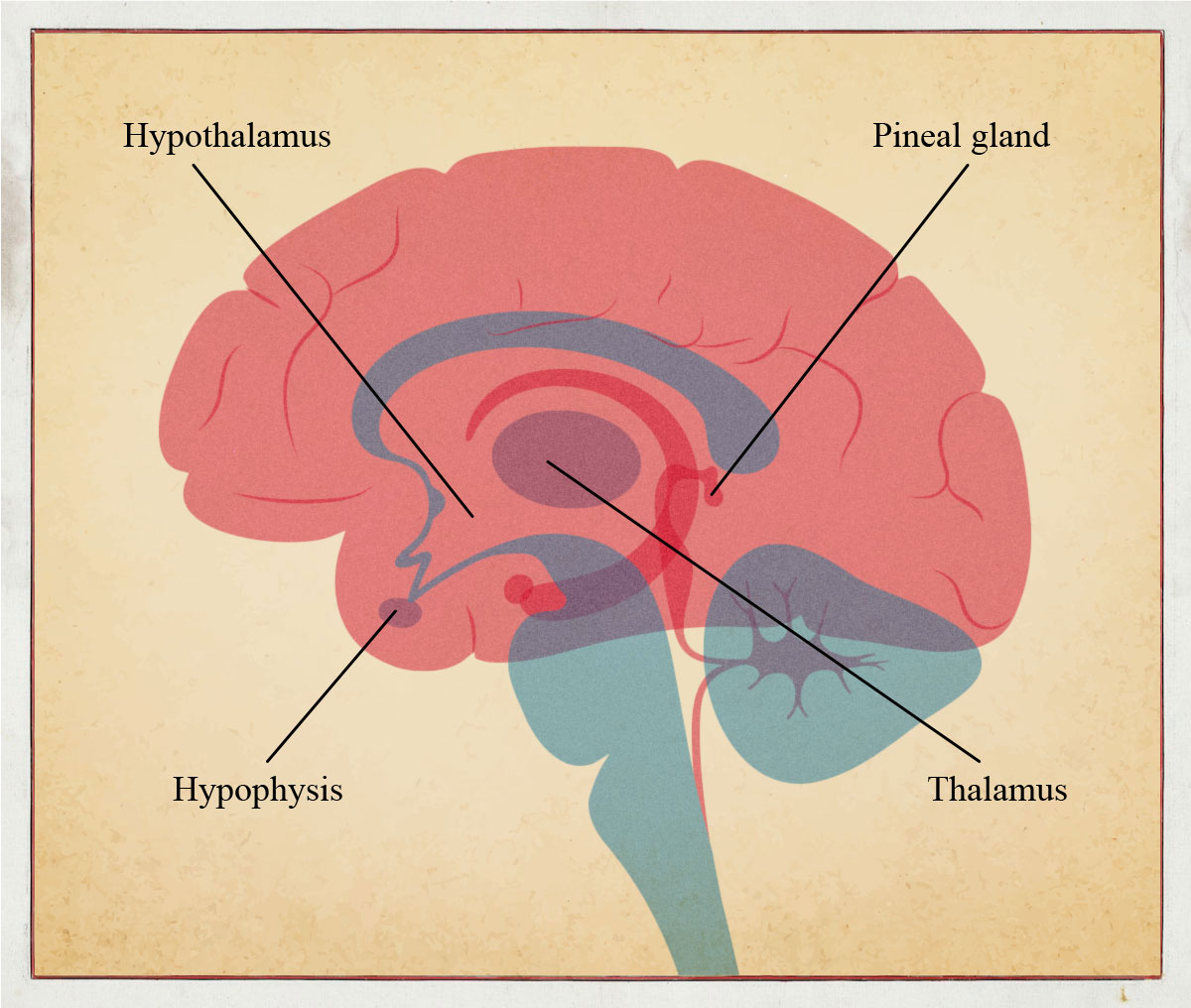 «Hormone levels vary over day and night, according to the regulation carried out by the hypothalamus-hypophysis-pineal network and the consequent neural and chemical signals are sent to the peripheral glands.»

The secretion of melatonin by the epiphysis (or pineal gland), takes place during the night, a time of day when it produces a higher quantity.

Plasma levels of melatonin produced by taking a tablet depend a lot on several factors, including: the release rate of the formulation, its composition and its chemical-physical properties; from daytime and night-time concentrations of melatonin in each person that, as we know, have huge individual variations; from age and many external factors that may alter and disturb melatonin secretion; from the metabolism of melatonin that is known to vary from person to person and decreases with the advancement of age; it therefore extremely difficult to establish the indicated dosage for the administration of exogenous melatonin.

To induce the “night message” and the “young physiological nocturnal peak” between 1 and 3 in the morning, it takes less than 1 mg (according to recent studies, it would in fact seem that doses of around 0.3-0.5 mg are effective), but at the right time! In this way, the pineal gland “rests”, preventing it from making the effort to produce it.»

Measurements of levels found in blood and saliva have highlighted the existence of a defined time span in which the molecule reaches a peak.

Production of nocturnal melatonin in relation to age.

Taking measurements of this molecule’s levels in blood and saliva, returning to what was said above, is concentrated in a defined period of time. This period of maximum production has been identified as being between 1am and 3am at night.

These are the hours of the night where we enter the deepest sleep phase, that activates the physical regeneration and recovery processes.

At birth, a minimum production is registered, which then increases rapidly and regularly up to the years of puberty.

In the early years of life, the nocturnal peak has an extremely high variation curve in that specific part of the night. After levels fall during adolescence there is then a gradual reduction in secretion, that levels off at about sixty years of age.

In the same way, starting from adolescence and as we grow older, the nocturnal peak also progressively flattens. 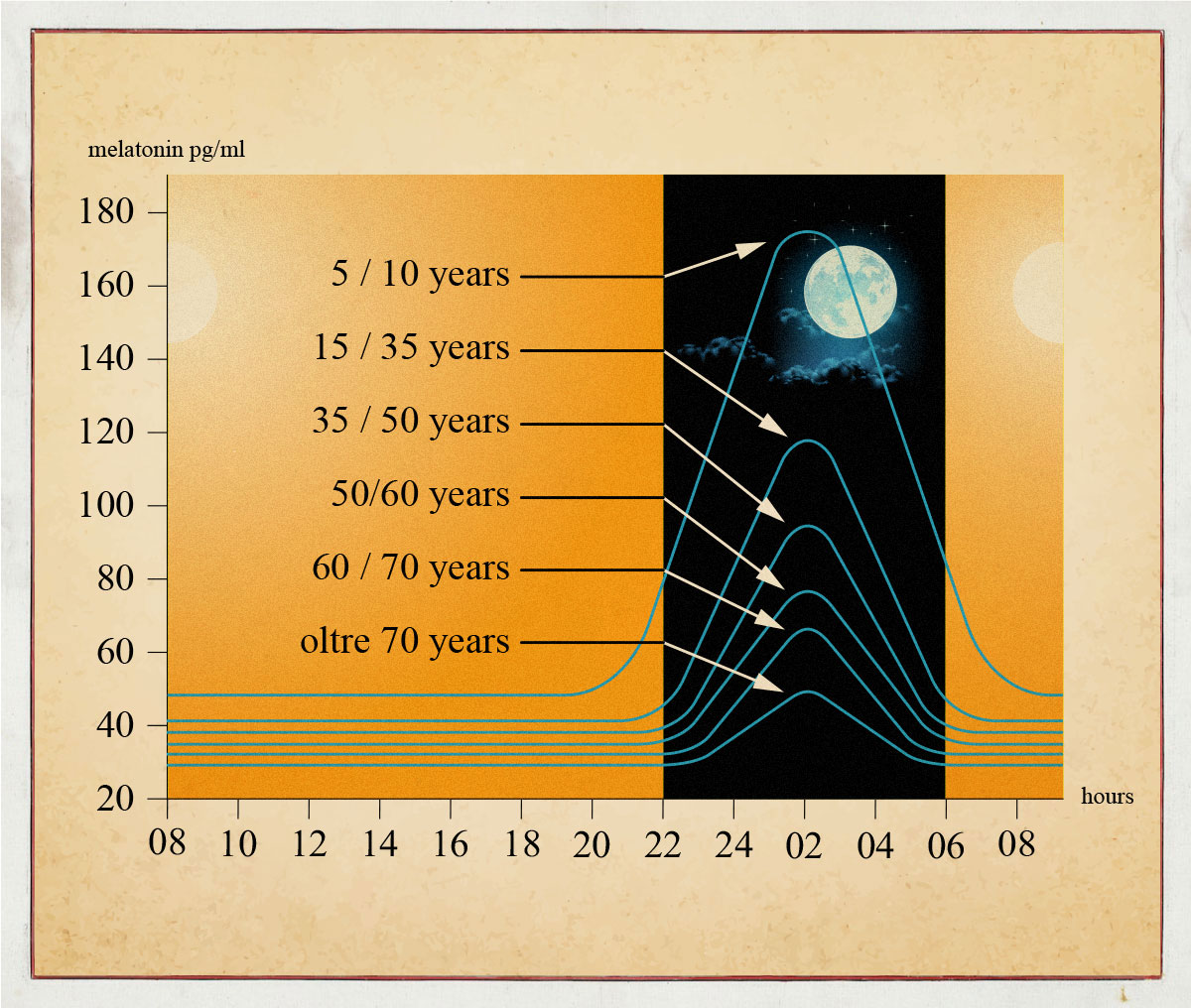 Secretion of melatonin during the night through life.

In the early years of life and in subsequent growth phases, the molecules reaches the highest concentration levels. During these years production is at its highest.

A reduction in the concentration of this molecules can already be seen in puberty, which corresponds to – and determines – an increase in hormones, in particular in gonadotropins FSH and LH. The fall in melatonin levels brings about sexual maturation in both males and females.

From twenty to fifty years of age

As physical maturation proceeds and we become adults, it is possible to detect a progressively lower level.

The pineal gland continues its precious work of melatonin molecule synthesis and production on a gradually decreasing trajectory. The organ thus progressively ages and deteriorates, which heralds the entry into a descending spiral towards deterioration.

After the age of fifty

It is the age when we see the first signs of aging, accompanied by an increase in fragility and vulnerability to attacks (due to the immune system’s lower reactivity) and a reduction in the capacity and speed of the cell renewal process. The pineal gland continues to produce melatonin, but by producing it it ages and produces less and less.

← The pineal gland, our life clock One molecule, several effects →